Finished dress with a 1940s hat made in my studio and plastic necklace circa 1960s.

I have recently been coveting 1930s knit dresses but the sizes and the prices were not the right fit for me. Sara had a bat wing jersey knit shirt which looked very 30s so I  decided to make a copy and turn it into a dress.

First I used pattern trace material and pinned it very carefully to the t shirt marking the grain and the centre front on the fold. As you can see I added a seam allowance  of 1.5 cm and made a front and back as well as sleeve cuff. The shirt had a lower hem cuff which I eliminated.  I found some sweater knit with this amazing green wavy line in a shine.

I then decided to add a waist seam instead of making long seams since I assumed the sweater knit might just stretch and stretch to the floor. I used the skirt part of a pattern I’ve made lots since I knew the fit. I eliminated the hip faux pockets and added length to be 30s. 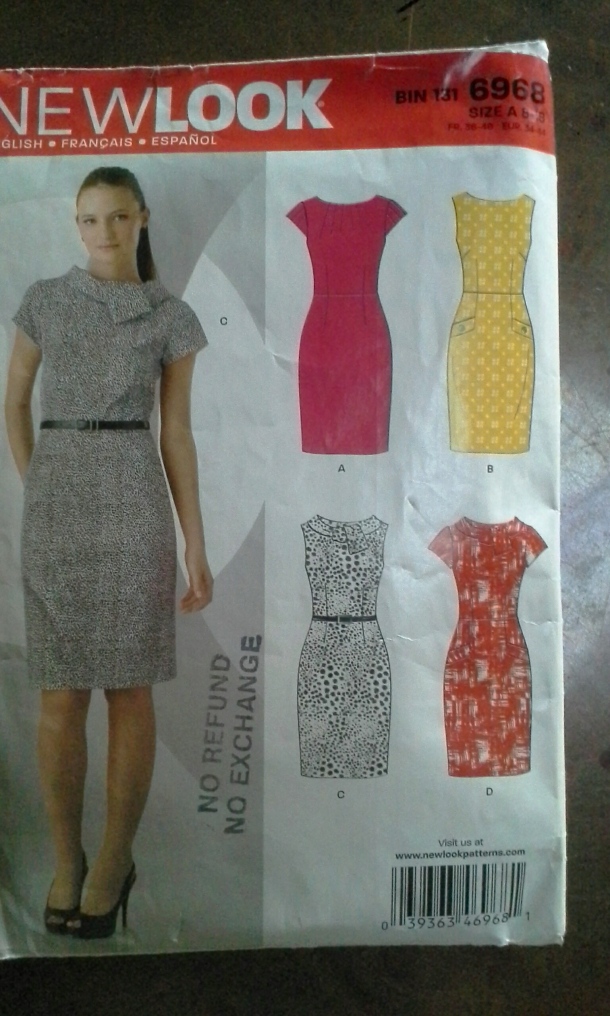 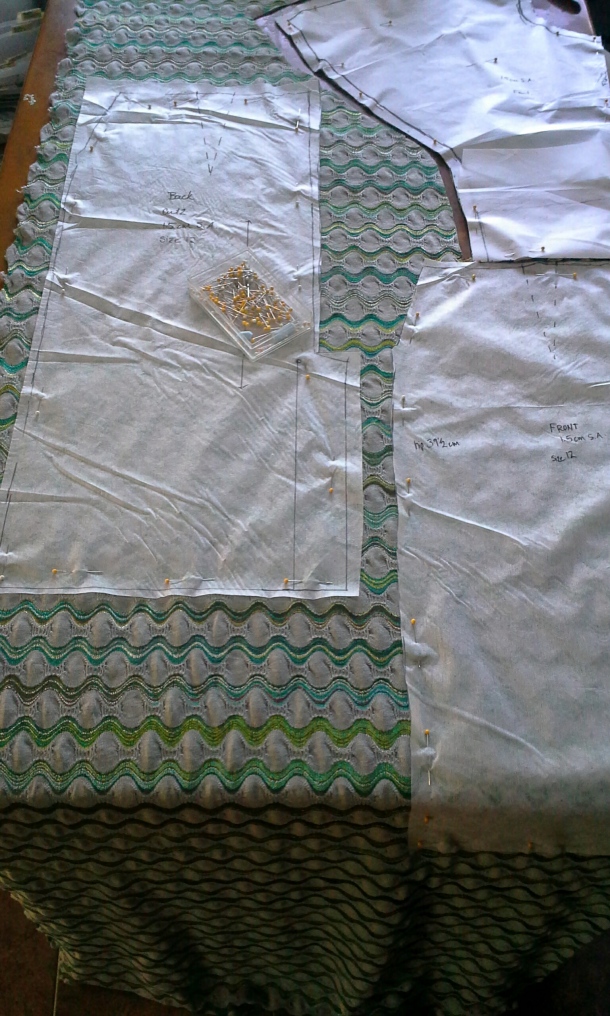 I sewed up the dress, tried it on and only needed to raise the waist line so it would fit in a more historically correct fashion.  It was very quick to make up and I’m very happy with it. I have already decided on the next fabric for it that will need a full slip to match. I need to make a matching hat for warmer weather since the wool one I am wearing will be far too warm soon. 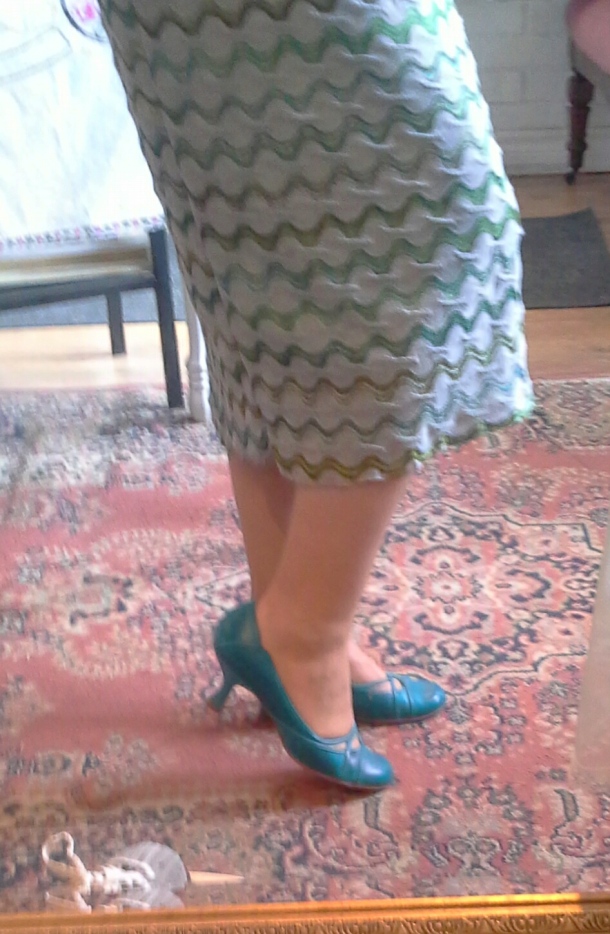 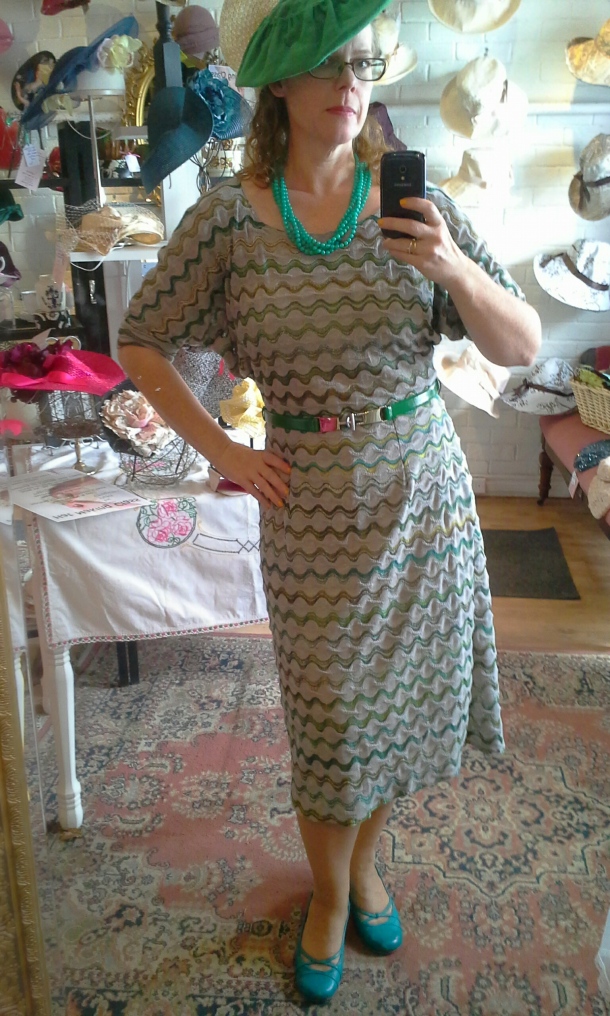 I am wearing thrifted shoes and belt and I’m in my studio  with better light and a fab mirror.
Until next time.
Cheers
Meaghan

Quest Gallery is Now a Stockist!

Quest Gallery Shop in Midland Ontario is now  Le Petit Chapeau stockist. The Quest gallery is a lovely space on the main street of Midland.

A modern and well thought building, this gallery has changing contemporary art and an education programme and of course a shop. It shares space with the Midland Cultural Centre which has a lecture series, a performance series and both share a lovely cafe. The shop features Ontario fine crafts people in a range of mediums as well as a small but well thought out section of art supplies. 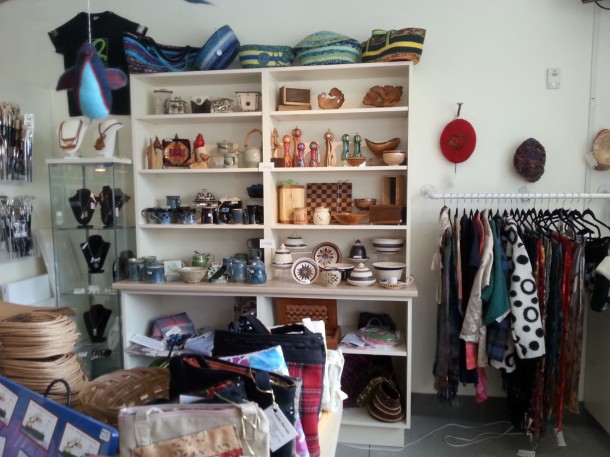 The gallery shop has kindly agreed to accept my work and as long as it sells, I get to stay! The selection will be small due to space but I am offering my most popular mens cap, The Poor Boy Hat in a lovely fine black wool with a white fine chalk stripe. When these sell I will add others in a different material so get to them quickly.

I have also taken 2 weekenders. 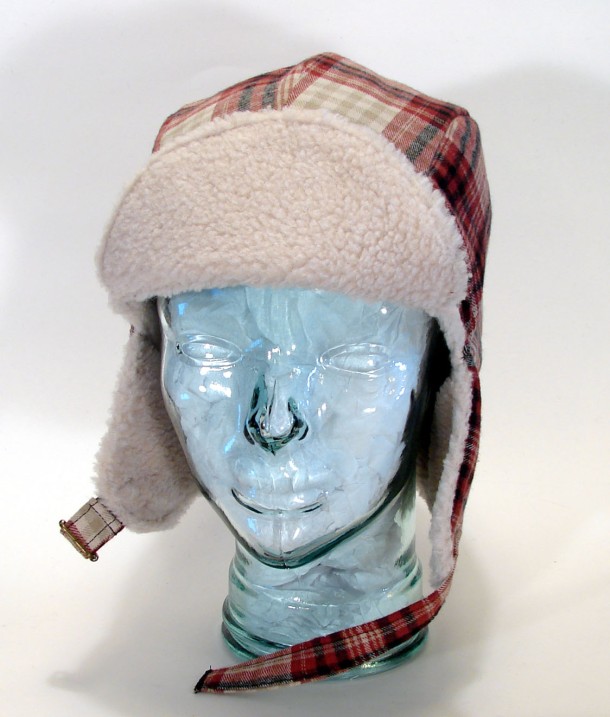 and The Jockey Hat in a heavy and warm pink and green fabric. 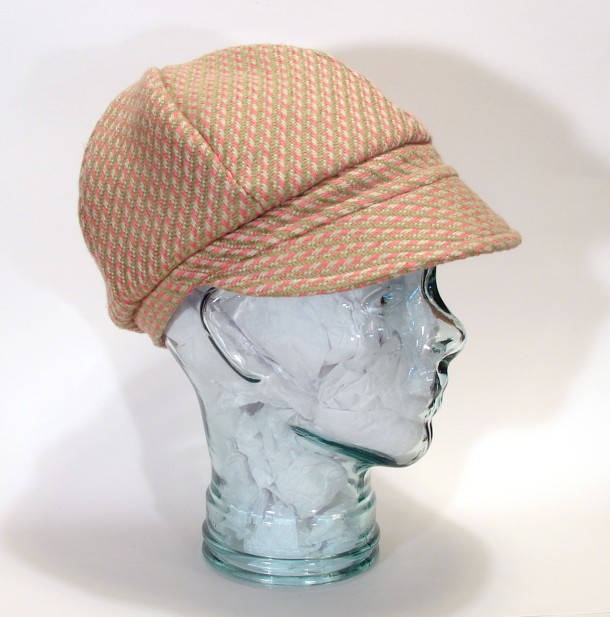 There is also one Collette.

I have also taken several fascinators but space allows me 3 so I choose wisely. Grey, purple and ivory crins.

All of the hats offered are under $100 and lots under $80. I only live 50 kms away so I will be able to restock fairly quickly if Midlandiands shop!

My commision from the sales goes directly to their art education programming so support us all and shop local and handmade. 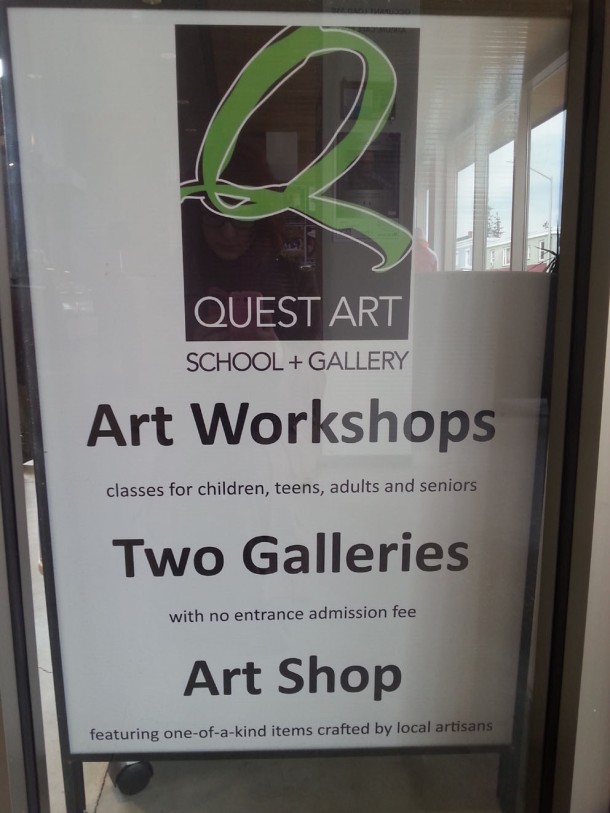 If you are from the area and would like to see a hat pop-up shop at the gallery space please let me know!

My Journey to Becoming a Clothes Horse

Once upon a time I was a jeans and t-shirt kind of girl, or tank top and board shorts as illustrated in my very poor quality picture.

My sense of style didn’t get better than this in my teenaged years, but thankfully as an adult I got some excellent guidance from a great friend and awesome boss. It also helped that Goodwill used to have a 50% off sale every Friday.
It all started with a “no pants at work rule”. This was a dilemma as all I owned were pants, so Meaghan made me a denim pencil skirt and the original tie belt.

Since this one outfit, I’ve come a long way.

This is only the winter half of my clothing and almost everything I own was bought second hand. The exceptions to this would be things I made for myself, Awkward Stage pieces and the few, rare mall finds.

Now I after five years of work I have a pretty great sense of personal style that always seems to be evolving in someway. But to find out about that you’ll have to click here or here.

I know it’s been a while since either of us have posted or had a good rant, but to be honest, we’ve just been too busy. Between juggling custom orders, new leather messenger bags, fall and winter production at the shop and a seemingly endless costuming contract for the Simcoe County Museum as well as the infamous Art Ce Soir organization we’ve hardly had a moment to stop and think.

Still before the summer ends and Meaghan and I take a much needed vacation, I thought I’d tell you how I feel about plain old dingy tank tops, wife beaters/racer backs in general and the aforementioned clothing garments on men. I suppose I could sum it all up with one word, ick, but where is the fun in that?

I understand that plain old tank tops have a use and I have nothing against their being worn for work, exercise, as an undergarment or layer. But when it comes to being worn as your “going out” shirt or every day casual wear, just don’t. Now I don’t mean all tank tops when it comes to the wardrobes of women, go for something a little more and a tank top can be a dressed up thing. Mind you adjustable spaghetti straps and a shelf bra do not constitute more. Also if you find yourself over the age 25 and/or a C cup or greater do yourself a favour and put a bra on, you’ll thank you when your fourty-five because that shelf bra isn’t going to cut it. Ever.

Now as for men, wife beaters have their use. Work, exercise, layering or as an undergarment are all acceptable things. When it comes to any other tank top and for any other use, no. There is nothing that turns me off more than on a hot day when an arm is draped around my shoulders and the unlucky one of the two ends up in the sweaty armpit hair of said arm. Those boxy things that look like t-shirts with out sleeves are just as bad. And come on now guys, if your tank top or any shirt for that matter says “pardon my swagger” you haven’t got any, I promise. No one is fooled by your “cheeky” shirt. If you’re convinced otherwise, I challenge you to show me a mens fashion magazine where one is being sold as a good option.

Remember, just because we live in a society without major social classes does not mean we have to be classless society. Your armpits, along with your dingy undies, ass cracks, ass cheeks and vaginas are not fashion statements.

I have been thinking about style and aging lately. It’s likely because my birthday is coming up and it always makes me think of growing older. Obviously. I have always had a particular and personal sense of style. Fashion was important and I followed trends but as I grew older style and what it was to me  evolved.  I think that too many of us look for an identity in the trend driven places and shops. Magazines are filled with promises if you only buy this newest thing. I think this society has always been like that. What I think is important is developing a personal style that either speaks to the trends within a developed look or ignores them completely. I think I speak to the trends when they suit me. Right now with the 80″s look abounding in the shops I’m ignoring it. It doesn’t flatter me. The colours and the shapes are all wrong. Again and again I look to vintage since it is most flattering for me being rather shorter and curvy.

Accessories follow trends as much as the clothing so I find it interesting that hats are just not going away. They are still in the shops where what we foolishly seem to think the leaders of fashion are, the mall. I find it disheartening though when many people come into my studio and either say, “Are hats coming into style yet?’ or “I don’t look good in hats but I like them”  What kind of statement is that? I’ve said it again and again, everyone looks good in hats and like everything else it’s the shape that suits you best. No one looks good in those floppy “straw” hats that are out yet people keep putting them on their heads because it hasn’t occurred to them that trend isn’t necessarily flattering. So when someone is in my studio saying hats don’t look good they’re just plain wrong. I’ve shown person after person that they can wear a hat. They are surprised and happy that they look good in a hat because they’ve always liked them but never believed they look good. I say it’s perception. “What do you want to look like in  a hat?” I ask. They see everything that they are not instead of what they are. That, I believe, speaks to this lack of finding their personal style.

After about age 24 the message from just about everywhere is fashion is for the young and skinny. Where did this come from? It’s in the same logic line as cut all your hair off at 30 or when you have a baby? Why? Why do we do this to women and men for that matter. The message is “Don’t try, you’re old now” What?!

Do you really think at 38 I’m old? Do I? Do I. You bet I do. I fell into that burning ring of fire in my mid 20’s I listened to all that claptrap about how I’m old now, fashion isn’t for you. You’re not skinny enough or tall enough for fashion and to top it all off I stopped listening to my instinct that told me otherwise. Argh! Foolish things we are.

At 38 I have a streak of white hair. I don’t dye it out. I earned it. This hasn’t been easy. I still am  not thrilled with the shape in the mirror but I’m beginning to see it differently. I am rediscovering my style. Not one dictated by the mall shops because they need to keep people unhappy so they keep people buying but one filled with things I love. Gloves, belts, vintage purses and hats. I’ve always loved hats. So I am taking this renewal to the studio.

I have always made hats for everyday with a woman or man in mind who isn’t wearing gloves and vintage dresses like I do but takes a little time to find a shape and colour that suits them. Someone who puts a little effort in for them. Someone who doesn’t where things that aren’t flattering because it’s easier, because they have given up. Fashion isn’t foolish. It employs millions of people  around the world and is an industry worth billions and billions of dollars. It’s not about trying to be 20 again. It’s about saying I am worthy at   (fill in your age) to FEEL good about myself in part through the clothing I put on my body. It doesn’t make you into a fashion whore or stupid or someone else. The best thing is that within the vast world of fashion there is space for everyone.