What a difference 6 years makes.

I opened my studio shop 6 years ago on Canadian thanksgiving weekend. I remember the 4 months of renovating the space from an old garage to what it was as well as Chris and I working full-time on other projects. I took some pictures on that first day. 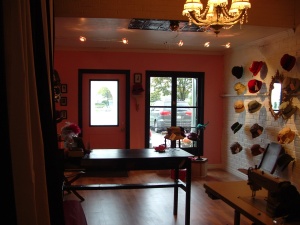 Original pink in the studio on opening day

The brick wall with half the hat display there is now and no furniture. Opening day 2006

The window display. I had so much room around it that day!

I belive I had 6 cocktail hats when I opened. Now it’s half my stock! 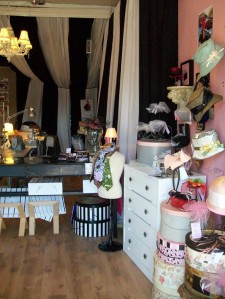 This is just as you walk in the door in the fall of 2009. It still seems so open and the original pink is still on the wall.

The location of my shop is on a mews which, since the building I’m in is on a hill, runs behind the buildings on the historical main street of Barrie ON. Canada. The city has made enormous changes to the area and several other galleries and studios have opened up since I moved in. So many changes that the city declared it the “art hub” of the city. I don’t know about that but I’ll take the free advertising.

Since I am at the back in what used to be a garage I have a large green wooden garage door I pull down when I’m not open for security reasons. The fall of 2009, I think, found this door, at 60 years old, finally broken and that meant ripping down a large portion of the fancy carpentry I created to have an exterior wall inside a garage door. That is when the paint changed to deep hot pink. I might go back to this vintage pink some day.

This is what the shop/studio looked like in July of this past year. Soooo full of such great things. I love it.

Changes in the studio have come slowly much like the changes in my designs and fabric choices. Sometimes a good thing shouldn’t be tampered with too much. The front of the shop looks essentially the same. different urns and a new sign based on the old one. I was speaking with my carpenter in residence and asked how he felt about making me a square bay window and getting a blacksmith to make a security gate instead of a garage door so people can look into the window when we are closed. He grunted knowing now that the snow is flying he’s off the hook until the warm weather.